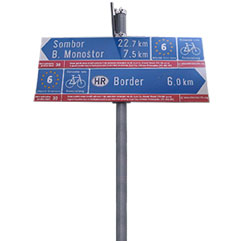 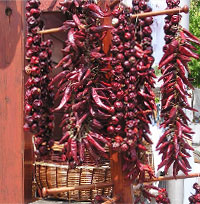 … the names of the towns, but they will hold a place in your memory anyway. Why? Because they are steeped in the past and their buildings remind of other times and other ways. The landscape may be unfamiliar to you: the Puszta (say “pusto”) is an expanse of grasslands picked out by bushes and the occasional sand dune, with a few low forests and freshwater marshes along the flood plains of ancient rivers. People have lived here a long time and the landscape itself has been cultivated for centuries.

We will meet you at Vienna’s Schwechat Airport and transport you to the first night’s hotel in the small town of Rust, still in Austria but with the Hungarian border only a bicycle ride away. Rust itself is a treat, arcaded houses and narrow lanes, an introduction to pleasures to come.

Among those pleasures: just across the border is Fertörákos, handily located near the limestone quarry that has been mined since the Romans to build the town. The quarry now includes a cave theater; we’ll see it on our lunch-time tour. Birdwatchers alert: the distinctive terrain of the Puszta is hospitable to wildfowl. Castles are another feature of the landscape, among them the Esterházy Palace where Joseph Haydn was court musician and composer on the side. Another is the castle in Sűmeg, distinguished by its splendid views across the countryside. Baroque architecture adds interest to more than one small town.

Decisions, decisions: in Keszthely, where we spend two nights and you will have an afternoon on your own, you may want to simply explore the town. (Note: we will have had a tour of Festetics Palace there, but not the Georgikon Farm Museum (early farming tools) or the Trophy & Model Railway Museum, a singular gathering of stuffed animals and model trains.) Or you might have a swim in Lake Balaton, the body of water that helps to define the area we’ve been cycling in. Or, there’s the local marzipan museum.

Our last day on the bikes gives us a ride along the lakeside bicycle path from Keszthely to Balatonszárszó, a fitting finale to pedaling the Puszta, but we can’t leave Hungary without investigating paprika. A coach ride to Kalocsa, where decorative folk art and paprika production are equal enthusiasms, will mend that oversight. A visit to a local horse show will introduce us to the fact that our western plains are not the only place where cattle ranching, supervised from horseback, has happened.

Time for city pleasures, after all this wide-open space. Budapest, long a center for arts and music and sophisticated living, can provide. The city is handsomely situated on each side of the Danube, Buda to the west, Pest to the east. A walking field trip will give us a sense of the place and a taste of its history, before you have time to explore on your own. The following morning, we leave from Budapest Ferihegy Airport. Perhaps taking some paprika home with us.